Morgan, Malvern & Motoring tells the story of Harry Morgan and his first forays into motoring and car manufacture. Impeccably researched over twenty years, it is illustrated by a wealth of rare and superb photographs.

Few large companies have survived a century in family ownership but one, Morgan, and it is also the world’s oldest privately owned car manufacturer. Many myths are dispelled as the story of the firm’s early years is told.

Morgan has had a link with the market town of Malvern for its entire hundred-year life. Harry Morgan, son of a Herefordshire minister, was to put Malvern on the car-manufacturing map. The Morgan ‘Runabout’ was to be the first of a long line of three- and four-wheeled Morgans that still leave the Malvern factory today. 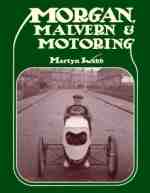