The second book in the occasional series, following the worldwide competition efforts of Morgans from 1954 to 1960. As well as the obvious coverage of Morgans competing in rallies, trials and races in the UK, the special feature of this book (as in the first edition covering up to 1954, which may be still available) is the coverage of the cars in competition in the USA, New Zealand, all around Australia and some other far flung places! A definitive record of Morgan competition around the world and a must for the serious Morgan enthusiast. 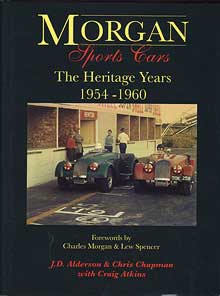