Next to their famous large, luxurious and fast automobiles such as the Dilambda, Astura, Aurelia and Flaminia, the Turinese firm has always produced attractive smaller luxury models, mainly intended for the European market – but a number of them were also exported to the USA.

The Appia was the last small car Lancia designed with the traditional sliding pillar independent front suspension and ultra-short four-cylinder V 4 engine. The name Appia was a tribute to the Via Appia, the historic Roman road which dates back to 312 BC. It connected Rome and Brindisi on the Adriatic coast in South Italy.

Oude Weernink’s book covers all aspects and evolutions of the Appia range. Its pedigree, its technical conception and the updates that differentiated the three successive Appia series. Many photos with captions give an interesting overview of the elegant and sporting special bodies designed and made by the iconic Italian coachbuilders; Allemano, Boano, Motto, Pininfarina, Vignale, Zagato and Swiss Ghia Aigle.

But it is also a very useful book for the Appia owner, with a chapter about special accessories available at the time when those cars were young and the tuning equipment to improve the performance and speed of these little machines. There is a section with well-illustrated pages which will help those who restore, repair or want keep their Lancia Appia in perfect shape.

Wim Oude Weernink, author of the famous Lancia-bible “La Lancia” among others, has written this book with both knowledge and love. His first Lancia was an Appia. And although he has owned a magnificent Astura Coupé and several Aurelia models, he still has two Appia in his garage: an elegant Pininfarina Coupé and a pick-up called a Camioncino. 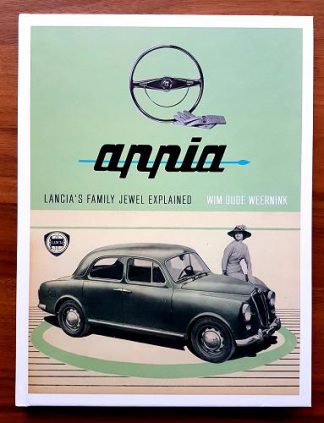