The tricycle was the original racing machine whose average speed increased from 16mph in 1897 to more than 60mph by 1902. Fifteen years earlier, the bicycle had opened up new frontiers for many, and the tricycle added excitement in great measure, at considerably less effort. The narrative of the evolution of the tricycle and its short-lived successor, the quadricycle, cannot be told simply by reference to De Dion Bouton. For this reason, The Tricycle Book 1896 – 1902, De Dion Bouton and its Contemporaries, sets out to paint the picture of activity in Europe, encompassing more than 40 manufacturers and engine builders. The work is divided into two parts: part one covers all the well-known French makes including De Dion Bouton, Gladiator, Phebus, Marot Gardon, Clement, along with others that have long-since disappeared. Part two is focused on Great Britain and will feature Ariel, Brown Brothers, Dennis, Riley, Slinger and Singer, as well as others whose output was modest but who nevertheless made a contribution to the historical landscape.

Having covered De Dion-Bouton Tricycles in Part One of this book, also supported by the Michael Sedgwick Memorial Trust, Michael Edwards has now written Part Two, covering the developments in the UK during this period. Many of the Tricycles featured either used De Dion-Bouton engines or near copies thereof. Having set the scene in the UK and how the regulation and society norms of the time influenced development, the author goes on to record all the known examples produced in the period, even those which only amounted to a single example. This substantial book fills a gap in the published history of early motoring. It was hailed as a success at Retromobile exhibition where some 300 were purchased, proving that there is still an appetite for history at or near the dawn of motoring. 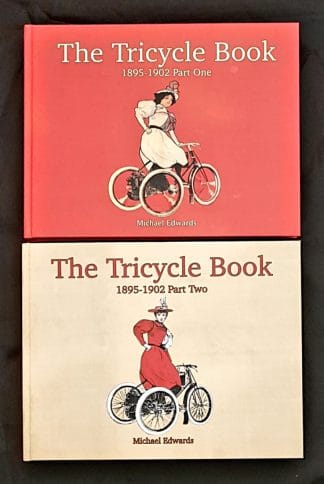