With the drop in three-wheeler production in the early 1930s HFS Morgan decided to introduce a four wheeler to keep the factory busy. The new chassis was derived from the F-Type three-wheeler one and was a sports car fitted with a Coventry Climax 1122cc engine. It was named the 4-4 indicating 4 wheels and 4 cylinders and was introduced late in 1935. As with all chassis that HFS designed he soon arranged for a selection of bodies to be available for it, namely two-seater, four-seater and later coupe versions.

In 1937 HFS made arrangements for the Standard Motor Company to develop a 1267cc ohv engine especially for the Morgan Company. Some were fitted prior to the Second World War but most were fitted afterwards.

Peter Morgan joined his father after the War and took the lead in the design of the Plus Four introduced in 1950, which was fitted with the Standard Vanguard 2088cc engine. This car became very popular for major rallies and driving tests.

Sir John Black of the Standard Motor Company tried to take over the Company in 1950, but HFS would have none of it. As a result Standard decided to build its own sports car, the Triumph TR2 with a specially tuned Vanguard engine. As Morgan were only allowed four of these engines per week by Standard, HFS Morgan decided to increase his build capacity by reintroducing the 4/4 model now fitted with the 1172cc Ford engine, which became available in 1955 as the 4/4 Series II.

Despite revisions to the styling the Morgan was regarded as being very crude and old fashioned when compared with the up-to-date styling of new sports cars from MG, Triumph and Austin Healey. Sales began to drop in the UK, despite the Morgan being better value. Luckily, the USA took every car it could get Morgan to make well in to the 1960s and a whole culture of sports car clubs and racing was developed in America during the 1950s, with Morgans being most successful and winning several SCCA National Championships.

In the late 1950s Chris Lawrence in London developed his Plus Four into a formidable racer in BARC Marque races, eventually causing Peter Morgan to introduce Chris Lawrence tuned engines in the Super Sports version of the Plus Four introduced in 1961. Chris won the class at Le Mans in 1962 with his racing Super Sports, entered by the Morgan Motor Company.

Despite the racing successes sales in the UK did not pick up, so Peter introduced a glass fibre bodied Plus Four in 1963 with modern styling. This Plus Four Plus was not a sales success but did waken up interest in the old style Morgans, which started to develop classic cult status and sales throughout Europe began to improve.

The 4/4 models proved popular in the UK, being improved during the 1960s by the fitting of increasingly more powerful versions from the range of ohv Ford engines developed from the Ford Anglia 105E engine. 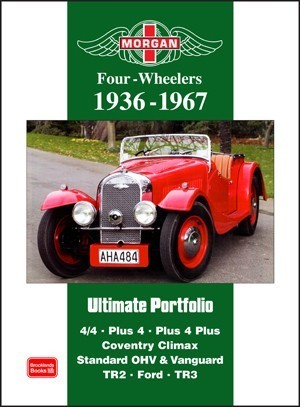