The MG Midget is such a well-accepted classic sports car today that it seems hard to remember that its origins lay in the badge engineering perpetrated by the British Motor Corporation in the 1950s. In fact, BMC’s Len Lord approached Donald Healey and asked him to design a cheap small sports car around Austin A35 mechanical components, and the result was badged as an Austin-Healey Sprite when it was announced in 1958.

However, MG also needed a new small sports car, and so the original Frogeye Sprite was restyled, using cues from the forthcoming MGB, and from 1961 was made available as the MG Midget. The Sprite continued alongside the Midget until the end of 1971 – hence the nickname Spridget for these cars – it was always the same car except for its badging.

In its 20 years of production, the Midget underwent hundreds of changes, and was produced in five distinct Marks. Mark Is had 948cc engines until 1962, and more powerful 1098cc types (complemented by disc front brakes) thereafter. Rear suspension changes and a power increase created the Mk. II models in 1964, and the Mk. III arrived in 1966 with a larger 1275cc engine. Rostyle wheels and the chrome grille gave way to a black one while occupants benefited from reclining seats. After January 1972, it had round rear wheel arches, but these did not last and the squared-off arches came back in 1974 on the Mk. 1500 Midget. Much to the disgust of traditionalists, this had black plastic bumpers to meet US regulations, a raised ride height, and a new 1493cc engine borrowed from the Midgetâ€™s long-term rival – the Triumph Spitfire.

The last Midget was built in November 1979, by which time there was no doubt that the car was outdated. It was still fun though, and that element of fun has never diminished. It is what has made the Midget such a popular classic car today – popular enough for British Motor Heritage to see commercial advantage in producing complete new Midget bodyshells from the original tooling so that enthusiasts can rebuild worn-out cars to as-new condition.

In 1961 the MG Midget was reborn, and production continued until November 1979. Included are road and comparison tests, new model reports and updates plus full specifications and performance data. Models covered: Mk. 1, Mk. 2, Mk. 3 and 1500. 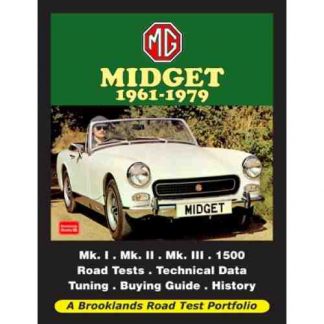