This book explores the Mercedes-Benz W196Râ€™s historic roots, development, and racing. Also its triumphs, struggles and disappointments, as well as the spirited challenges from Maserati, Ferrari, Gordini and Lancia. Accompanying the text are hundreds of photos sourced from the legendary Daimler Archives, as well as stunning new artwork.

â€¢ Details the designing and developing of the W196R

â€¢ Page after page of great racing stories and photographs 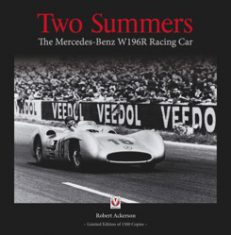