An exclusive photo album on the Lancia Stratos in motor racing, with previously unpublished images!

It certainly isn’t an exaggeration to call the Lancia Stratos ‘a true work of art’, a masterpiece of style, design and technical avant-garde.

This mix has created a car that was surprising then, iconic now, and has entered the hearts of many enthusiasts.

With this publication, the author wants to offer a new and further testimony on the Lancia Stratos, using images taken from 1973 to 1980, mainly on the roads in Sicily.
We see it engaged in track, in the hill-climbs, at the Targa Florio, at the Giro d’Italia, in the Rallies, at Monte Carlo in 1973, at the Rally 4 Regioni in 1980.

Driven by many drivers, Ballestrieri, Facetti, Munari, Pianta, Pregliasco, Tabaton, all united by a true passion for this car.
The book also includes a series of shots of an extraordinary Stratos.

Limited Edition of 500 copies – numbered and signed by the Author on a special certificate. 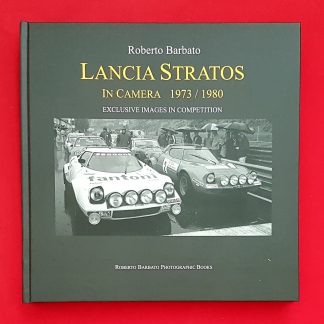