Lancia Flaminia details of the collection

Lancia Flaminia details of the collection.

When Lancia’s new owner Carlo Pesenti arrived in 1955 at the Via Monginevro company office in Turin, development of the prestigious Flaminia model was well underway. Building on preceding Aurelia principles but cast in fresh molds, with an industry-leading fresh Pininfarina design. It was brought to the market with state-of-the-art advertising and promotional activities. It was part of Pesenti’s new ‘triple F’ industrial and commercial vision for his traditional company. But the new Lancia Flavia and Fulvia soon overshadowed the Flaminia. It is sad to notice that Lancia’s decline which led to a takeover by Fiat in 1969 coincided with the last Flaminias leaving the old San Paulo works. But it was not forgotten and interest in its legacy is reflected by increasing attention by connoisseurs and specialized classic car media. However, a book on Flaminia’s origins was missing on many Lancisti’s bookshelves.

That is why author and Lancia historian Wim Oude Weernink took the challenge and dived into the early developments of technical ideas, analyzing the radical new design approach and a marketing strategy based on different body options. The presentation of a Flaminia GT model bodied by Carrozzeria Touring at the 1958 Turin Motor Show surprised the local car-making community. It enjoyed a reasonable success with three complementary model variants.

And then there was the Flaminia Sport, a classic Italian icon. Two principal body styles, many detail differences, confusing production figures and some quality issues did not detract from the Zagato mystique. Only 526 Zagato-bodied Flaminias were made in various configurations and styles. But they became Lancia’s most popular and sought-after models of the Sixties. And this book finally sheds a light on its intricate history.

The longer the author researched sources which would lead to the roots of the Flaminia, the more details never noticed before were brought to light. One of them was the extremely short development time, from drawing board to the first prototypes hitting the road. But also the sports history seemed to be a never-told story which included the foundation of the HF Squadra Corse which in later years became so successful in international rallying. He insisted on using as many authentic illustrations as possible, because they visualize the Flaminia’s presence in its time – from Miss Italia presenting the model to the press, to a Flaminia Coupé winning the European touring car challenge. Including many hitherto unpublished historic images and artistic printed material, courtesy of sleeping archives, private collections and renowned historic institutes. 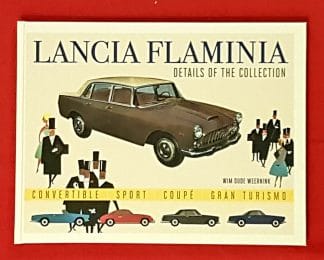