The book follows the story of the car named after Enzo’s son from its first appearance in 1965 as a styling exercise, through to the last production car, built in 1973.

Although not the fastest or the most powerful Ferrari, the beautiful lines of the Dino have inspired generations of enthusiasts. This book provides the definitive chronicle of the Dino, from Pininfarina concept car through to the final production model, and is illustrated throughout with contemporary material.

The production cars for the US and European markets are looked at in year-by-year detail, so that all variants are described.

– Over 250 contemporary pictures, mainly in colour

– In addition to photographs, contemporary advertising and brochures have been used 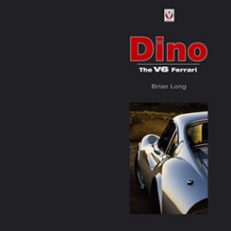