From its inception through the early twenties, Auburn produced a fine car at a reasonable price. In 1924, E.L. Cord took over operation of the company and things began to change. Cord, a consummate salesman, dolled-up the conservative Auburn and made it into an object of style and taste. Sales increased dramatically. Auburns participated in many speed and endurance challenges and broke many records. In the thirties, Auburns were well known as high-performance vehicles, using both eight and twelve cylinder engines. Going out in a blaze of glory the 1935-36 boattail speedster, with a body designed by the famous Gordon Buegrig, was guaranteed by the factory to do at least 100 miles per hour. High quality photos and informative captions take you through the evolution of the Auburn. 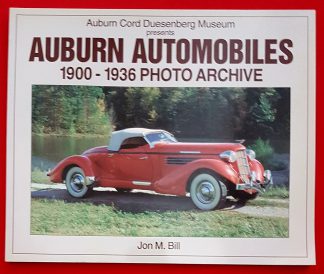