Between them, the triumvirate of Auburn, Cord and Duesenberg produced some of the world’s greatest automobiles. During that turbulent era between the two World Wars these three famous marques came together under the auspices of a determined young entrepreneur named Errett Lobban Cord, and it was thanks to his guidance that the cars would eventually achieve almost legendary status. It was E. L. Cord’s reputation as a superbly successful salesman that saw him recruited to rescue the ailing Auburn concern in 1924. Hired as the general manager with an option to buy into the business, Cord quickly transformed Auburn’s fortunes and within two years he was company president. This was only the first step in his quest to establish a major automotive empire, the Cord Corporation, which soon included the Columbia Axle Co (manufacturers of the two-speed rear axles), Lycoming (engine suppliers to Auburn) and the Duesenberg Motors Co. Challenged by E. L. Cord to design a car that could match the finest available, Fred and August Duesenberg came up with the fabulous Model J, which made its New York debut in 1928. Obviously this magnificent new Duesenberg could only be afforded by the extremely wealthy, an exclusive group of potential customers soon to become even fewer in number. Intended to provide a car that would fit into the price gap between Auburn and Duesenberg, the introduction of the front-wheel-drive Cord L-29 model a couple of months before the US stock market crash of December 1929 was unfortunate timing. However, even without the effects of the Depression it is doubtful whether the American public was ready for such a revolutionary concept and the L-29 was dropped at the end of 1931. Amazingly, despite the national economic collapse, Auburn sales jumped to a best ever figure in 1931 but the company couldn’t continue to buck the trend and the numbers soon dropped back, incurring huge losses. Meanwhile, Cord announced a radically-styled new model for 1935, the coffin-nosed 810. Sadly, the end result of its rushed development was problems, not profits. When the Cord Corporation folded in 1937, production of Auburn, Cord and Duesenberg cars came to an end. Today these beautiful and historic machines are a legacy of a truly remarkable period and this book contains a comprehensive appreciation of them. A portfolio of articles drawn from the leading international motoring journals covering Auburn, Cord and Duesenberg automobiles. Models reported on: Auburn 120, 8-98, 8-100A, 652-Y, 851, 852, 866, 876 and Speedsters, Cord L-29, 810 & 812, plus the Duesenberg A, X, J, SJ and the racing versions. Included are road tests & model introductions, driver & technical reports plus a wealth of historical features. 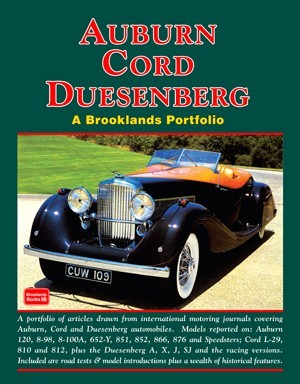