A long history of passion, culture and love for Alfa Romeo started in 1972 by some friends, then in their early twenties, who had a dream: to gather in one place Alfa cars that were in danger of being forgotten, but which still had a lot to say. Giulietta or 2600, 1900 or Alfette found shelter, comfort and new life.
Quickly, with the contribution of new members and new ideas, the Alfa Blue Team became a point of reference for many fans for what it had created over many years.
But Alfa Blue Team does not just mean Quadrifoglio branded cars; the collection aims to remember Alfa as a large mechanical industry, an industry that has produced light and heavy trucks, buses, aircraft and marine engines, power generators and much more, up to economic kitchens.
This fascinating story, which has its main temporal focus from the second post-war period to the sale to Fiat Auto, is told by its co-founder and President Gippo Salvetti and by the partners who have given (and give) life to this extraordinary reality that now attracts friends Worldwide.
A story not only for Alfisti but for all those who love (beautiful) cars. 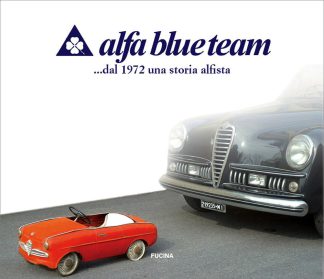