Between 1953 and 1980 the Triumph competitions department produced more than 150 ‘works’ competition cars for race and rally. These included TR2, TR3 and TR3A, the TR3S, TRS and Conrero race cars, Herald and Vitesse, TR4, 2000, Spitfire and GT6R, 2.5 PI, Dolomite and Sprint, TR7 and TR7 V8. In addition they prepared Standard Eight, Ten, Pennant, and Phase III Vanguard for competition. Viewed overall, what stands out as the remarkable feature of the work of the department was that they achieved such a degree of success with relatively ordinary production cars, from 803cc saloons upwards. Author Graham Robson was manager of the Standard-Triumph competitions department in the early 1960s and himself supervised the development and management of the works TR4s, Spitfires and 2000s. Here he provides information on each and every one of the works cars of the whole 1953-80 period, with details of their specifications, entries, drivers and careers, accompanied in nearly all cases by archive photographs. In addition there is specially commissioned colour photography of important surviving examples. 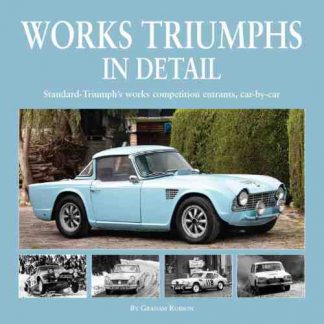