TVR – A Passion to Succeed

TVR A Passion to Succeed.

When Peter Filby set out to write about TVR history, he was only planning one book. But he became so involved with the subject, an wrote so much, that it became two books. And if you enjoyed The Early Years, you won’t want to miss part two of the amazing story of TVR.

Covering the period late 1965 to late 1981 when TVR was owned and managed by Martin and Arthur Lilley, TVR A Passion to Succeed is written in the same entertaining style as The Early Years.

Totalling 480 pages, the book covers the cars’ development, the company’t highs and lows, the important personalities and, of course, all the many amusing anecdotes. And within the sixteen chapters are hundreds of terrific photographs (over 680 in all).

Models described in depth in A Passion to Succeed are the MGB engined Mk3 and Mk4 1800S, the fabulous Tuscan V8s, the Ford powered Vixens, Tuscan V6, the 2500, M-Series cars, Taimar hatchback, 3000S convertible and early Tasmins. Indeed, no less than three chapters are devoted to the development of the early ‘wedge’ machines.

Also included are the stories behind TVR prototypes such as the Tina and SM/Zante along with a brief history of the rare and desirable wide-bodied Tuscan V8 of which very few were ever made. 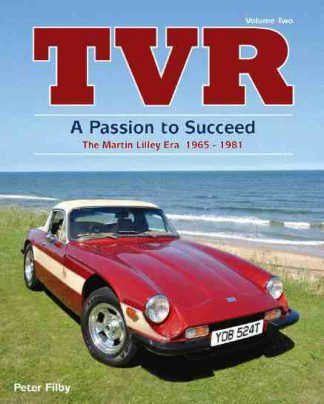