The Range Rover succeeded in spite of the odds. When it was conceived by Rover engineers at the end of the 1960s, the Land Rover side of the company thought it was insufficiently utilitarian and the Sales people simply didn’t know what to make of it. The only thing they could understand about it was that it was enormously versatile, and so they promoted it as a multi-purpose vehicle. The customers soon decided that they knew what to do with it, though. They bought it to tow caravans and boats, to carry loads ranging from surveying equipment to grandfather clocks, to trundle across the fields at the local gymkhana and to take the family on fast trips up the motorway at weekends. Before many months had gone by, there were waiting lists for the Range Rover, and new examples were changing hands for more than their showroom price. It was fortunate that this was so, because British Leyland (who owned the Rover Company) put very little effort into making the Range Rover a better vehicle in the 1970s. It sold on its reputation and, paradoxically, in spite of its reputation – for this was a noisy, thirsty, expensive vehicle which had formidable body roll on corners and was available with only two doors. Even so, the Range Rover certainly had something – and that something was character in abundance. It was this which helped to carry it through until its makers were able to introduce a four-door model in 1981 and to improve the package further over the next few years with an automatic option, an improved manual transmission, and more luxury equipment. By the time the Range Rover had been in production for 15 years, it was still recognisably the same vehicle, and yet it had been developed far beyond what its original designers had anticipated. This book leaves the Range Rover story as the vehicle was about to take some very important steps, by adopting a fuel-injected engine and a turbodiesel alternative. It tells the story of those early days, when the Range Rover was still becoming an international status symbol – a fascinating story which should be on the bookshelf of any true automotive enthusiast. 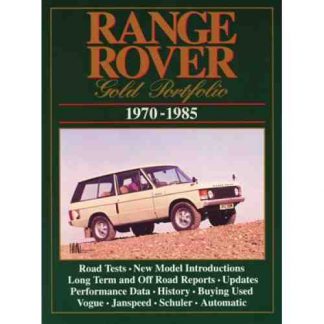