Porsche enthusiasts generally have mixed feelings about the 914. Some argue that it wasn’t a true Porsche, while others happily accept it as a member of the great dynasty. To some extent, opinions depend on whether the four-cylinder or six-cylinder models are the subject of discussion. The alliance between Volkswagen and Porsche which produced the 914 was a logical outcome of the two companies aspirations at the end of the 1960s. Volkswagen was still trying to work out a way of moving up-market (an aspiration it would eventually fulfil through the Audi brand), while Porsche wanted a volume-selling sports car to go with its established but expensive 911. The 914 was the first outcome of this liaison; the second was the 924, which had started life as a Volkswagen with Porsche input but ended up as a Porsche when VW changed its plans after the 1973 energy crisis. Targa-topped in case US legislation outlawed fully open cars, the rather angular 914 certainly didnâ€™t look much like a Porsche. In four-cylinder 914/4 guise with the 1679cc, 80bhp injected engine from the Volkswagen 411, many people thought it was only just fast enough to deserve the name, too. Nevertheless, the car sold well in America, and a total of 65,351 were built between 1969 and 1973. To cater for doubters, and to provide an incremental model, the twin-carburettor 110bhp 1991cc Porsche flat-six was made available in the 914 body too. Good for 120mph, this car nevertheless remained much rarer than the four-cylinder model, and only 3,333 were built before production was halted in 1972. Today, the 914/4 and 914/6 offer a relatively inexpensive introduction to the great world of Porsche motoring. For those who need to be convinced of the fact, the articles reproduced in this book should be required reading! 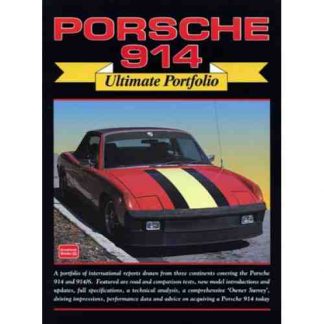