The 24th and final edition of the Mille Miglia, held on the 11th and 12th of May 1957, has passed into history above all due to the tragic circumstances of the accident involving de Portago and Nelsonâ€™s Ferrari 335S, which crashed in the latter stages of the race near Mantua. It was however, also a race characterised by a bitter struggle amongst the Maranello marqueâ€™s drivers, a duel that never happened with Moss and Jenkinsonâ€™s Maserati 450S and the last career win for Piero Taruffi. Behind all this, there was also another story, one equally as fascinating and rich in incident, that of the crews racing in the minor classes: from the Tuned Touring and the 750 classes to the Gran Turismo and Sport 750 and 1000 categories. This previously neglected story of “little” cars and almost unknown drivers is recounted by Carlo Dolcini, a painstaking and accurate historian, who has reconstructed in engrossing detail the â€œminorâ€ episodes of those days, drawing on a wealth of photographic documentation. 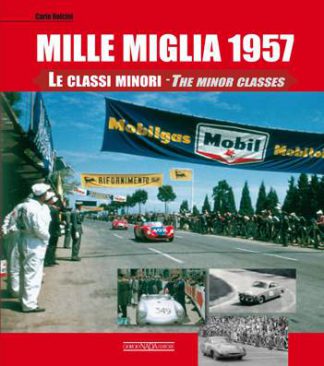