Pourtout is a name often mentioned as one of the greats of French coachbuilding. It was the company behind the rakish Darl’mat Peugeots of the 1930s and the famous ‘Embiricos’ Bentley. From modest beginnings, founder Marcel Pourtout – latterly working with designer Georges Paulin – created a respected business that bodied some of the world’s finest and most interesting chassis.

When bespoke coachwork became a thing of the past, Carrosserie Pourtout was one of the few companies to survive. It moved on to fresh areas of activity. Quick on its feet, it thrived in a newly dynamised post-war France, whilst remaining a family business under the direction of Marcel Pourtout’s second son, Claude.

Then Carrosserie Pourtout became involved with ALM, for whom it created a cab body that redefined the image of the company’s rugged trucks, these becoming a staple of armed forces around the world.

Finally, it became France’s leading converter of Peugeot light vans and a sub-contractor for the aircraft and oil-prospecting industries.

Written by award-winning author Jon Pressnell, this is the first history of Carrosserie Pourtout and has been compiled with the full and generous support of the Pourtout family.

Using surviving documentation from the archives held by Kévin Pourtout, it tells the complete story of this enterprising small business, from its inception in 1925 to its demise in 1994. 488 pages and 754 photographs. 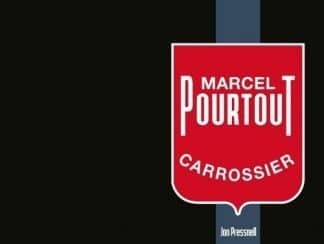