For anyone who wants to restore or improve their Series III,

this manual is the essential how-to guide!

â€¢ How to rebuild and install mechanical componentsÂ

â€¢ Replacing the bulkhead, including galvanisingÂ

â€¢ How to fit interior trim, seats and seat beltsÂ

â€¢ Using some Santana parts, as used in Spanish-built Land Rovers, to build something unique

Developed from several years of articles in Land Rover Monthly magazine, this manual is the most detailed package of information available for anyone thinking of restoring or rebuilding a Series III Land Rover.

We took a low-mileage, ex-military, unregistered Series III Land Rover, stripped it down to its bare bones, and then blended it with an original Series III Station Wagon in very poor condition. After stirring into the pot a selection of new and modified parts from a number of different sources, we ended up with the most immaculate and user-friendly Series III you could imagine.Â

Hereâ€™s how you can restore or modify your own Series III, from suspension, brakes, and steering, to engine, transmission and body improvements. You want better seats? Galvanised chassis and bulkhead? Immaculately restored body and mechanical components? This manual has the answers.

Featuring advice on rebuilding the rear body tub, the bulkhead, Station Wagon side frames, and much more besides, this book is a must! 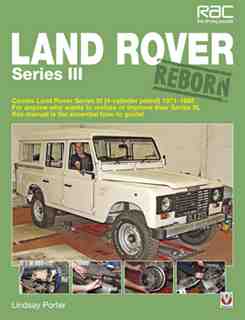