Fiats 500 models succeeded not so much because they brought affordable motoring to a wider public, but because they brought with that affordability a character which made them so much more than mere economy cars. And although the 500 went through no fewer than seven major variants in its nearly 40 years of production, each one of those variants embodied the essentials which had made the original model great – handling, more space than seemed possible in such a tiny car, and extraordinary fuel economy.

Within those seven major variants were many minor ones, too, and we must not forget rarities like the British-market four-seater based on 500A in the late 1930s, the versatile Giardiniera estates, the almost comical Gamine by the coachbuilder Vignale, and the very serious high-performance conversions by Carlo Abarth. In the 500 range, there is something to appeal to everybody.So powerful has the legend of the 500 proved that Fiat decided to call its small car for the 1990s the Cinquecento (500), a name which both instantly positioned the car in the market and gave it a wide appeal.This book will provide hours of entertainment for those who are fascinated by the legend of the 500, and for those who have taken the plunge and bought one of these intriguing little cars for personal transport enjoyment.

This portfolio of international articles traces the history of the iconic Fiat 500s over 36 years. Some 5 million were produced & included here are stories on the original Topolino, 500, B, Belvedere, 500C, 500D, Jolly, 500F, Berlina, 500K Giardiniera, Radbourne, Steyr, and Abarth. Included are articles on road tests, racing, rallying, tuning and advice on acquiring a good used 500. 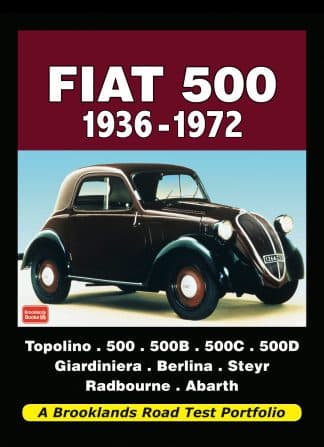