This is the tale of the Bresso manufacturer, which was founded in the Milan suburb in the early Fifties. Iso became known for its incredible variety of products over about 30 years, and its story is as fascinating as it is little known today. In fact, the company’s production was one of the most multi-faceted, ranging from electrical household goods branded Isothermos, to its unmistakable scooters and light motorcycles, especially the Isomoto; the three-wheeled Isocarro van; the revolutionary Isetta micro-car; the fabulous Iso Rivolta GT, Grifo, Fidia and Iso Lele grand tourers. This book analyses the technical aspects of all of these products, and covers the complex story of Iso itself, all reconstructed with the testimony of the key players of the period and the company’s own photography. Ample space has been given to the marque’s sporting activities, competing as it did in some of the great races of the past, among them the Mille Miglia, 24 Hours of Le Mans and even Formula One. The story is brought right up to the present day when, after a period of silence, work started up again to produce prototypes of the Nineties Grifo, the Isocity and Isigò city cars, direct descendents of the Isetta. 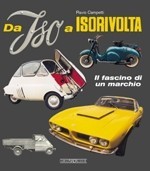