Classic Miniature Vehicles made In France

Classic Miniature Vehicles made In France.

Here, at last, is a long-awaited volume for collectors of miniature vehicles. After a span of several years, noted authority Edward Force turns his eye toward the vehicles produced in northern Europe from the early to mid-20th century. From Scandinavia the toys include the classic Tekno brand, as well as Vilmer and several smaller brands such as Bapro and Lemeco. Also included are a series of plastic models once offered by Lego. From Belgium, there are vehicles from the Gusquy-Septoy firm and the short-lived Sablon brand. Holland is represented by Lion Toys and the Best Box-Efsi-Oto-Holland line. Finally, the book contains the German Siku line. In all, hundreds of examples are shown in full color, plus the encyclopedic gathering of information that collectors have come to expect from Dr. Force. Values are provided for each model shown. This new volume will satisfy the pent-up demand for a new volume on miniature vehicles and will be a welcome addition to the collector’s library. 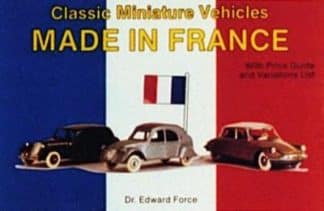