A history, description and analysis of the 3½ and 4½ Litre Bentleys built by Rolls-Royce during the 1930s following their surprise takeover of Bentley Motors early in the decade. Promoted as “the silent sports car”, these cars proved to be an extraordinary success due to their performance and manners, the excellence of their engineering and construction, the wonderfully attractive coachwork offered on the Bentley chassis, and the association of the Bentley with the illustrious reputation of Rolls-Royce. After outlining the story of Bentley Motors and the Rolls-Royce takeover, the author gives a thoroughgoing account of Rolls-Royce’s search for a car with which to relaunch Bentley before the earlier glories began to fade. Then he gives a highly detailed technical analysis of the 3½ Litre, covering every aspect of the chassis, running gear, engine and transmission. This is followed by equivalent coverage of the succeeding 4½ Litre and the short-lived Mark V. Each of these receives comprehensive treatment, including information on differences from previous models, revisions, the range of bodies available from coachbuilders, performance and behaviour, and appearances in competitive events. There are also chapters on using the cars today and on the practicalities of ownership, with advice on parts availability, maintenance and preservation. The 70 colour photographs, some of them specially commissioned, feature outstanding examples of the coachbuilder’s art, and are backed up by some 140 images from the archives. 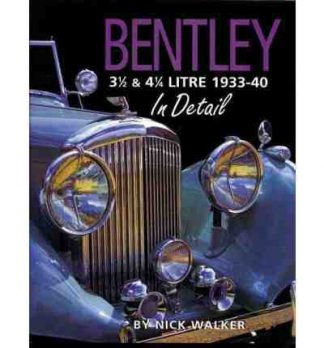