The motoring cartoonist has been active since the end of the nineteenth century, when the number of artists prepared to work at rapid speed, reflecting topical issues, and for modest compensation, comfortably satisfied the needs of the most discerning editors.

Many of these early motoring cartoonists captured the sentiment of the moment, and offered entertainment to readers, but relatively few of them would have argued that their creations had significant artistic merit. There were, of course, exceptions to this judgement. Ronald Searle, Russell Brockbank, Robert Sherriffs, Norman Thelwell, and a few others, firmly established themselves as favourites among the readers of motoring publications, a direct consequence of their ability to merge fine draughtsmanship with an acute understanding of the human condition.

The work of Tony Phillips-Smith, christened ‘Apsley’ by David Thirlby when Editor of the Vintage Sports Car Club Bulletin, sits comfortably with that of Brockbank and his ilk, masters of their craft that Tony has admired for more than half a century. Tony’s work has been widely published in local and international motoring magazines, the regular bulletins of one make car clubs, as well as the Cosy Park Garage books. As Tony mentions in the introduction to this book, “ the prime subjects were really the cars themselves. The human beings were types, especially the men, with a limited range of expression under a flat cap. For me, motor cars have always been alive, idiosyncratic, stylish, awkward, stubborn, but never boring. And always true to themselves, expressing themselves through their headlight eyes.”

Readers of Apsley and Old Cars will see exquisite line drawings, wry humour and commentary on the motorist’s life. This volume provides a ‘retrospective show ‘ of the best of ‘Apsley’’s work. 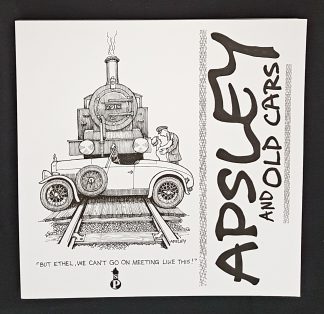