Start your engines. Henry Ford jump-started the age of the automobile with the first assembly-line car in 1908: the Model T. For the next one hundred years, the automobile would evolve from chugging workhorse to tailfin-era showboat to sleek status symbol, stamped with a Mercedes Benz hood ornament. Once a novel invention of wonder, the car of the Postwar Era grew into a necessity of the modern age, a key to the freedom promised by the open road. So various were the choices of colors and features offered to American car buyers, that by 1960 all their possible permutations (by one formula) exceeded the number of molecules on the earth…”Automobiles of the 20th Century” offers a lush visual history of the automobile, decade-by-decade, via 500-plus print advertisements from the Jim Heimann Collection. Advertising has always been the dream work of industry, and nowhere is this more evident than in the world of auto advertising.
Narrated with introductory and chapter text by “New York Times” automotive writer Phil Patton, as well as an illustrated timeline and sidebars, this volume highlights the technological innovations, major manufacturers and dealers, influential historical events, and the influence of popular culture on car design. The car is an indicator of more than mere technological innovation; its trends are a reflection of the cultural zeitgeist, whether in the form of a VW Beetle or a road-ready Hummer. The Stone Age, the Bronze Age – ours could be called the Automobile Age, and this collection puts you in the driver’s seat through the 20th century. 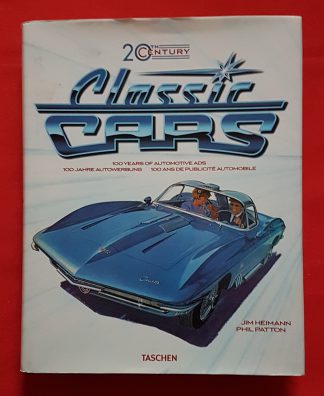