“Group 2 – The genesis of world rallying” is a comprehensive review of the 1950s and 1960s. Then rallying was a big adventure, capable of capturing the imagination and enthusiasm of a Europe that was rediscovering its romance with the motorcar. Rallies like the Monte Carlo, the Liège-Rome-Liège, the Acropolis, the RAC and the Rallye des Alpes were the jewels in the diadem of the sport. And new challenges arose like the East African Safari, the 1000 Lakes and the Tour de Corse. All these events tested the crews that entered them to the very limits of speed and endurance. If the cars were less sophisticated than those we are familiar with in the 21st century, the skills to drive them quickly were perhaps of a higher order. Certainly the stars of rallying from the period of this book are still well-known names sixty years later–for example, Erik Carlsson, Timo Mäkinen, Paddy Hopkirk, Eugen Böhringer, Jean-Pierre Nicolas and Pat Moss. The same applies to the legendary cars that changed the sport such as the Mercedes 220SE, Mini Cooper, Porsche 911, Lancia Fulvia and Alpine-Renault A110. “Group 2–The genesis of world rallying” is the first complete review of the sport in the period 1946 to 1972. Over 256 pages, author John Davenport, who was part of that era as a co-driver and journalist, tells the story of the evolution of a sport from being largely something for amateurs to one that was fully professional. It was a time of growth, excitement and adventure and is covered here by comprehensive annual reviews, interesting features–such as a report on the great long distance rallies of that era–and results from all rounds of the European Championship and the International Championship for Makes. 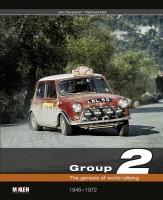