Stanguellini: the other Modena racing company

The first of the ten chapters included in the book is a bit of a provocation. In fact, it recalls how a ‘small’ Stanguellini Sport 1100 car, thanks to excellent road holding, beat the new and still ‘green’ Ferrari with a 12-cylinder engine of 1500 cc, in some races of the 1947 season, the debut one for the newly-founded Prancing Horse manufacturer. The ‘snub’ received from another Modena-based company, which was just as committed to the construction of sports cars, albeit with a smaller engine displacement, certainly annoyed Enzo Ferrari but in any case, he had very little to complain about. He had too much respect and friendship for the ‘Magician’ Vittorio Stanguellini, ever since the latter showed up in Modena racing circles in the company of his father Francesco, a pioneer of local motorsport. Stanguellini of Modena was a large family: in the second half of the 19th century, Celso, father of Francesco Sr., had founded a company for the construction of orchestral kettledrums with patented mechanical tuning.

From there, it was a short step to the ‘mechanics’ of automobiles: Francesco Sr. became Fiat’s first representative in Modena, while his son Vittorio later extended the agreement with the Turin-based company, but his passion and technical ability also lead to the tuning and construction of racing cars as early as the early 1930s. Vittorio certainly knew his way around and he put together a small empire, based above all on the Sport 750 and 1100: the workshop in Viale Moreali, and later the larger one in Via Schedoni, become a worldwide benchmark, which from 1958/59 was confirmed with the construction of the Formula Junior cars (what would later become Formula 3), intended for up-and-coming drivers. The Stanguellini Formula Junior with a 90 hp Fiat 1100 engine and a top speed of 200 km/h was the most popular and successful car in the crowded category. However, the Formula Junior regulations required that the engine was derived from a production car, albeit with a wide range of tuning possibilities. As he was linked to Fiat, in the 1960s Vittorio Stanguellini, now flanked by his son Francesco Jr., built some Formula Junior (including the modern ‘Delfino’) and then Formula 3 single-seaters, with engines derived from the ‘1300’ and ‘124’ of the Turin-based company. Thanks to the copious archive material of the brand (photographs and documents), the book reconstructs in detail the history of the manufacturer from the blue ‘S’ on a yellow background (the colours of Modena), summarized by the extensive Museum, set up at the time by Francesco and now impeccably curated by his daughter Francesca: fifth generation of the ‘racing’ Stanguellini family. A chapter of the book is dedicated to the Museum and it is basically a ‘guided tour’ of the cars and the curiosities it hosts. The same cars, perfectly restored, were photographed outside in a spectacular way and can be admired in the ‘portfolio’ combined with the same book. 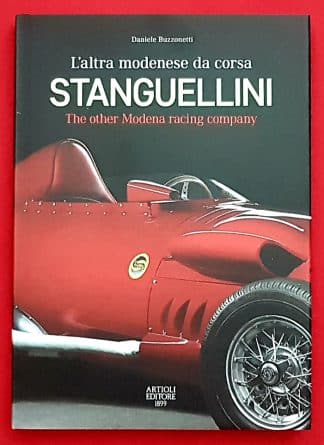