The Porsche 964, as it was called internally, was an exceptional member of the 911-family with unique characteristics. It was a bridge between the old and the new and benefitted from the best of both worlds. The 964 still had the classic 911-profile of the very first 911, introduced as the 901 in 1963. Now, this bodywork was cleverly redesigned below the bumper-line, taking the 964-design right into the nineties. The most important novelty though, was underneath the skin. It combined the classic shape with a modern driveline and, in case of the Carrera 4, an innovative all-wheel drive system. Added to this were the usual features of its day, like ABS brakes, power steering, airbags, central locking and a decent heating system. All of this was propelled by a powerful air cooled flat-six coupled to a perfect shifting transmission. It was Porsche’s new 911 for years to come and could even be called ‘the modern classic’.

‘Porsche 964 the modern classic’ is a hard-back full-colour book (245 x 245 mm), written in English and contains 344 pages with over 850 photos, including concept drawings, prototypes and many unpublished factory photos, provided by Jens Torner of the Porsche Museum Archive.
With foreword by the lead exterior designer of the Porsche 964, Benjamin Dimson, who also provided valuable information.

This book is published with kind permission of Porsche AG and covers all aspects of the 964-series; 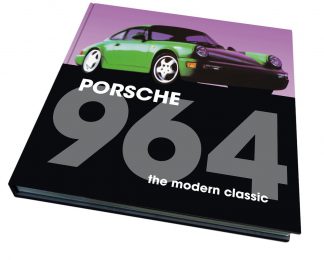