As a service to the classic car enthusiast VelocePress, in close cooperation with Brooklands Books Ltd., has brought this and other repair manuals previously published as part of the Autobook – Autopress Owners Workshop Manual Series back into print. This series of manuals is an invaluable resource for the classic car enthusiast and a – must have – for owners interested in performing their own maintenance. These manuals include detailed repair & service data and comprehensive step-by-step instructions and illustrations on dismantling, overhauling, and re-assembly. Typically they contain individual chapters that deal with the following items: Engine, Carburetor & Fuel System, Ignition System, Cooling System, Clutch, Transmission, Drive Shaft, Rear Axle & Rear Suspension, Front Suspension & Hubs, Steering Gear, Braking System, Electrical Equipment and Bodywork. There are many time saving hints and tips included and there is an easy to follow fault diagnosis at the end of each chapter. All of the manuals in this series include a detailed index and feature an oil resistant laminated cover. 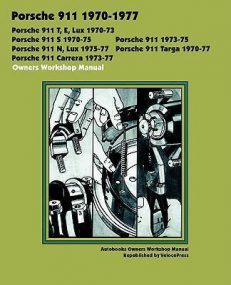