The small car category is the one that has made Fiat’s reputation over the course of its long history. The Turin-based firm has, in fact, been the undisputed leader of Italian motorization thanks to economical, efficient and reliable products that permitted car ownership to spread ever wider. The idea of the car for all took shape after the First World War with models such as the 509 and the 508 Balilla and flourished in 1936 with the 500 Topolino, Italy’s first true utility car. The post-war period saw the consecration of the popular car in the form of the 600 that was immediately followed by the peerless 500. The tradition continued with the 850, the modern front-wheel drive 127 and the 126. The flair of Giorgetto Giugiaro was then responsible for the protagonists of the 1980s: the hugely successful Panda and Uno. Passing by way of the Cinquecento, the Seicento and the various incarnations of the Punto, the book also presents the current models: the Nuova Panda, the Grande Punto and the brand-new 500. Equipped with exception contemporary photographic documentation and detailed technical files for each model, the book recounts the story and development of Turin’s small cars, paying attention to technical aspects as well as the close ties with the social conditions and customs of a period in which they have played a key role in Italian life. 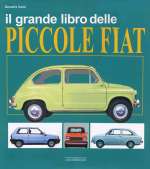