A fairy tale with a happy end: in the early years of the 1970s, a little boy who lived in a town in the Argentine Pampas dreamed of moving, in the not-too-distant future, to Modena’s Motor Valley to design cars at the same level of Ferrari and Maserati, which he admired in the pages of motoring magazines. The boy was Horacio Pagani, whose grandfather had emigrated to Argentina from Appiano Gentile.

Determined to realize what seemed an impossible dream, at the start of the 1980s the young Horacio left for Italy, armed only with excellent technical ability, an iron will and his own ideas on the use of innovative composite materials, for the construction of high-level sports cars. With no financial means at hand, his decision to do so was not a walk in the park, and he only managed to join Lamborghini as a third-level worker after a series of rejections.

From that moment on, a new story began for Horacio Pagani, one that was linked to his ability to transform futuristic carbon fibre into components that combine high technology with style. In Modena, he created a design company that gradually integrated itself among the top names in the Motor Valley, to the point of becoming a true benchmark for sporting supercars.

The first car produced in a newly built factory, which was opened in San Cesario sul Panaro, finally arrived at the start of the new century. It was the Zonda, a 2-door berlinetta with a strong personality and not only because of its 12-cylinder engine (through an agreement with the AMG division of Mercedes-Benz), extremely high performance and obviously… the right price. The car did not appear to be a clone of the high-class sports cars on the market, and supercar enthusiasts were quick to recognize it. The car’s production in series, albeit limited, found admirers and buyers in all parts of the world, so much so that Pagani was able to inaugurate a new factory a stone’s throw from the earlier one, which was kept as a centre of style and design.

With a special procedure, the Italian Argentine manufacturer was able to fulfil customer requests, significantly moving away from the basic model. The majority of the Zondas built are almost unique ‘pieces’, a feature that also characterizes the new Huayra model, which succeeded the Zonda in 2013 and is just as full of extreme and fascinating solutions. Features that are also found in the new headquarters – with an adjoining Museum that tells the story of the brand – far from the commonplace nature of the usual ‘engineering factory’ and perfectly in line with the ideas of Horacio Pagani, an absolute perfectionist for every technical and aesthetic detail.

In 320 pages, enriched by fascinating photographs, the book, created together with Horacio Pagani himself and with the support of representative figures of the San Cesario company, spans the entire life of the Italian Argentine technician, from when he was making balsa wood models of cars to his triumphal entry into the great manufacturers of Motor Valley. 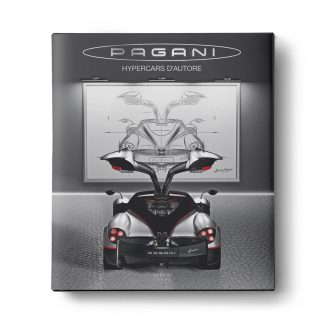