Let’s be real about this. It’s not every high-performance car enthusiast who has even seen a McLaren F1, let alone driven one. And in view of the car’s initial purchase price – £634,500 in 1993 and even more today – that’s no great surprise. But every car nut, high-performance enthusiast or not, knows what a McLaren F1 is. It’s a legend on wheels – the car which broke most of the rules in the book by combining a Formula 1 racer with a manageable road car. Gordon Murray’s design made no compromises. Even its arrowhead seating layout was carefully designed to provide maximum passenger space within the minimum body width. Factor in ultra-light weight, hugely distinctive aerodynamic styling without a trace of flamboyance, and a very special 627 bhp V12 of just over six litres driving through a six-speed transversely-mounted transaxle, and you begin to get some idea of what this car was all about. The figures are still mind-boggling, 10 years after the car made its debut, and the car boasts performance which few of us can really comprehend. Peaking at close to 240 mph, the F1 would hit 60 mph from rest in 3.2 seconds and 100 mph in 6.3 seconds. To reach 200 mph needed less than half a minute. Perhaps it was no surprise, then, that every buyer of an F1 had special driving tuition thrown in as part of the purchase deal. Just 65 road cars were built, and there were racing versions, too: seven competed at Le Mans in 1995, and the one driven by Masanori Sekiya claimed victory, making him the first Japanese driver to win the legendary European race. The material reproduced in this book is as full of superlatives as the car itself. Most of us may never get to drive one – but by reading this, we might share a little of the excitement experienced by those who have. This book contains road tests & driving reports from three continents together with performance, technical data & full specifications.

This compilation of magazine articles tells the performance story of the McLaren F1 sports coupe and the GTR and LM developments of the F1. It is the story of the fastest road car ever built, told by those who were there when it happened in articles from British and American magazines. 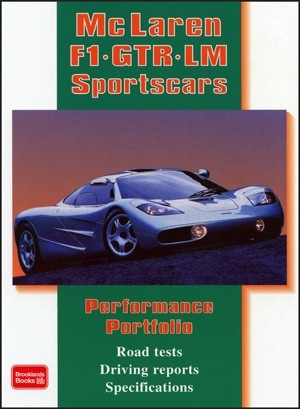