Jaguar founder Sir William Lyons had a terrific hit on his hands when he launched the ‘compact’ 2.4 Litre sports saloon in 1956. Motorists loved it, and those wanting more thrills were soon offered the ‘hot’ 120mph 3.4 Litre a year later. Both were replaced in 1960 by the Mark II models, which added a 3.8 Litre, and from there the range was developed and expanded with the long-booted S-Type of 1964, the 4.2 Litre 420 of 1967, and the final 240/340 models of 1968. Alongside there were the Daimler V8 and Sovereign models. The success of this family of cars can be attributed to Lyons’s faultless instinct for what buyers wanted and his unerring eye when it came to styling his cars. And of course there was the fabulous six-cylinder XK engine which powered all Jaguars from 1948 through to 1985, with the equally inspired V8 in the Daimler. All these cars have enjoyed an exalted classic status for years, and the matter of originality has become more and more important to owners and prospective owners today.

Here Nigel Thorley, the unrivaled expert on the cars who has been writing about them for more than 30 years, provides all the information that can be expected from books in our acclaimed Factory-Original series. Model by model, with hundreds of specially commissioned colour photographs of outstanding examples of the cars, he gives all the details of correct original factory specifications and equipment in all departments, right down to the tool kit. 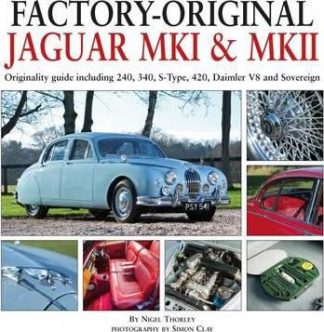