Intermeccanica -Â The Story of the Prancing Bull.

â€¢ Intermeccanica cars are highly collectible and are still made todayÂ

â€¢ A David vs. Goliath story which spans half a century and three continentsÂ

Frank Reisner, a Hungarian-born Canadian, turned a youthful passion for cars into one of the worldâ€™s most famous small sports car building companies. From modest beginnings in Turin, Intermeccanica designed and produced a dozen different and exciting models that shook the motoring world in the 60s and 70s.

From modest beginnings based in the automotive mecca of Turin, Italy throughout the 1960s and into the 1970s, Intermeccanica conceived, designed and produced a dozen different models that shook the motoring world and went on to find homes in museums and collections from Europe to the United States to Japan. Most notable of these models are the Apollo, the Italia and the Indra.

From there it was on to California, where Reisner revolutionised the Porsche replicar market with his groundbreaking fibreglass Speedster design, followed by the Roadster RS, which the company continues to produce at its Vancouver, BC, Canada headquarters.

Along the way, Reisner and Intermeccanica dealt with, and in one case sued, the largest automotive manufacturers in the world, all the while maintaining an independent streak and maverick spirit that would come to define the man and his company.

“You have to applaud Veloce for the fringe subjects it publishes, such as this glossy tome on Intermeccanica. With the aid of founder Frank Reisner’s widow Paula, and access to the factory records of the Hungarian entrepreneur, McCredie covers the full saga from first FJ racer to the successful replica business.” â€“ Classic & Sports Car

“This superb book tells the story of the marque, a real David and Goliath story if ever there was one, and features some rare family photography never before seen â€¦ an enthralling tale â€¦ long overdue and superb.” â€“ Total Kitcar

“â€¦ with considerable input from Reisner’s wife, the book charts these mavericks’ development with anecdotes, personal portraits and a wealth of photos.” â€“ Classic Cars

“â€¦ three fascinating chapters and an epilogue, all of which should be read by every Speedster fanatic.” â€“ Speedsters.com

“The illuminating and rewarding tale of Frank Reisner’s company and his cars is well worth the detour into this book.” â€“ autoblog.com

“Intermeccanica: The Story of the Prancing Bull is an exciting, top pick for any collection strong in sports car history and culture. It offers a David vs. Goliath story that spans half a century and three continents and tells of Frank Reisner, who defied the odds to keep an amazing auto company in business. Intermeccanica worked with legendary car designs and produced some extraordinary sports models: this survey documents the volatile, exciting history of the company and its operations. A key for any serious auto and sports car library, this is a top pick!” â€“ Bookwatch 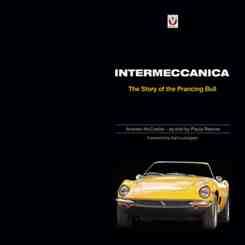