For the first time, one of the major names in Italian car design tells his story from the beginning; from when he made his first sketches on paper, unbeknown to his parents and not only of cars, to reaching a point at which his name became synonymous with some of the best known and most important cars on the international front. In his 23-year career at Pininfarina, Leonardo Fioravanti, who was first a designer and architect, then managing director and director general of “Studi & Ricerche” department, created some of the most beautiful Ferraris of all time; they ranged from the 1965 250 LM sports coupé Speciale to the immortal 1968 Daytona through to the 1975 308 GTB and GTS and the 1984 288 GTO, as well as the P5 and P6 of 1968. While continuing his Ferrari essay during his Pininfarina career, Fioravanti also guided the creation of numerous other projects, among them the Dino road car, the 1980 Pinin four-door prototype and went on to the 1984 Testarossa and the 1987 F40. Images of an epoch, designs from his own personal archive never previously seen and, above all, a passionate first person account. Those are the key elements of this outstanding book which, through the creations of Leonardo Fioravanti, covers over 50 years of the history of automobile style and culture.

“The dream is still possible: this is the message I would like transmit to the young, even the really young, because it is from that age that one begins to design cars. Having had the good fortune to realise my dream, I tell my story as a designer at Pinin Farina, Ferrari, Fiat and Fioravanti with the duty of a witness. You must want to be a designer very much, think and aim always at that and only that, without pretense or deviation through much suffering, which would not be so painful, however, because the conceptual satisfaction, above all, would be so intense and intimate and contemporaneous and global that they would compensate for the hardness of life.” Leonardo Fioravanti. 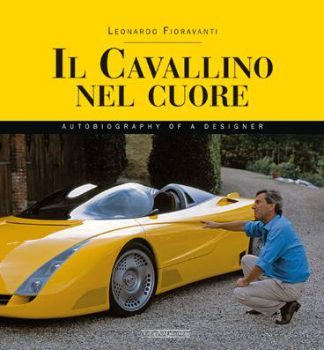