This book tells the story of all the cars developed within Group B, from the Quattros to the outstanding Lancias and Peugeots and to the exotic sports cars from Porsche and Mazda. But all the technical development came to a head in the year 1986, when the euphoria somehow turned into an ungovernable risk. The mischief of engineers, rally organizers, motor sport politicians and fans led to tragic accidents that finally resulted in Group B cars being banned from international rallies.

John Davenport, rally-journalist and author of several books on rallying, experienced this era first-hand, as he was Motorsport Director of Austin Rover at the time. His comprehensive knowledge takes the reader on a journey into the fascinating world of these hi-tech rally cars and offers an authoritative insight into the power struggles going on behind the scenes.

The book is filled with photographs from the archive of well known rally-photographer Reinhard Klein. They show to best effect the technical details of the cars, the slightly crazy ambiance of the time as well as plenty of action from the special stages. 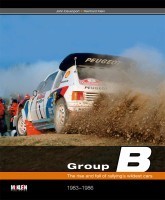