Among the numerous novelties presented at the Turin Motor Show in 1966, of particular importance was the stunning sports car designed by Pininfarina on the basis of the 124 Saloon. This 2+2 convertible with attractive and very compact styling, was fitted with a twin overhead camshaft four-cylinder engine.

Success in terms of client approval and sales was immediate and the 124 Sport spider project was one of those that defied the passing of the years. When it finally went out of production in 1985 a total of 200,000 examples of the spider had been sold throughout the world. Moreover, the competition versions of the 124 Sport Spider accumulated a highly respectable record in rallies, crowned by victory in the 1972 European Championship. The sister version of the spider, the 124 Sport Coupé, designed by the Fiat Styling Centre, was also successful in terms of production numbers, with 300,000 cars being sold over its 10-year career.
This new revised and corrected edition recounts the genesis and development of the 124 sports cars, including the Rally Abarth from 1972 and the story of the most significant victories, told through the words of the leading drivers. Completely renewed in the iconographic apparatus – with many more color images than the first edition and photo shoots specially made – the book is completed by a guide to restoration and technical files on the versions sold in Europe. 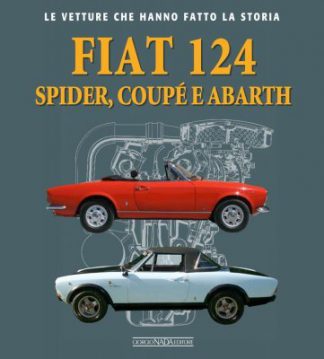