A must, an “exaggerated” Ferrari, a remarkably impressive car still today, more than 30 years on from its launch. The Ferrari F40 caused a sensation when it first saw the light of day in 1987 thanks to its uncompromising lines and a formidable mechanical specification, most of which left in plain sight and promising unrivalled performance. The car emanated immense appeal from every side. The last of the Prancing Horse’s GT cars “approved” by Enzo Ferrari is the protagonist of this book by Gaetano Derosa, a book that starts from a long way out, analysing the “forebears” of the F40: from the 250 LM of 1963 to the 308 “Millechiodi” of 1978, to the 288 GTO of 1984 and the GTO Evoluzione of 1986. The technical and stylistic evolution of the F40 is also recounted by the figures responsible for this thoroughbred Ferrari: from Leonardo Fioravanti, in his dual role as designer and at the time vice-chairman of the Maranello firm to Nicola Materazzi who defined the monstrous eight-cylinder engine that powered the car and through to Piero Ferrari himself one of the great supporters of the F40 Le Mans project. It is no coincidence that the book concludes with an exhaustive chapter dedicated to the F40 in racing, from the GT and single-marque championships to the return to the Le Mans 24 Hours. 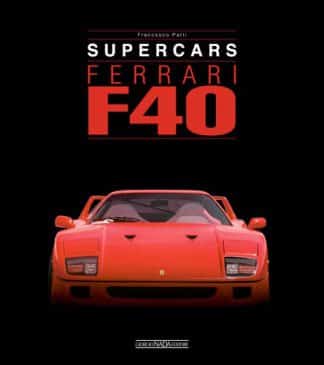