Unlike the previous editions of the ’90s, this book concentrates on the Abarth 58 and 70 HP versions of the Autobianchi A112, the rarest of all and the most sought after by collectors. This is an across the board analysis of the car: it contains a general historic introduction on Autobianchi, Carlo Abarth and the A112 itself. They were the cars that began the decline of Abarth in 1971, and the book contains an analysis of the entire evolution of the seven series that succeeded them in the following 14 years of production. There is also a section devoted to documentation: the use and maintenance manuals, catalogues, leaflets, advertising and a segment giving advice on the Abarths’ identification, purchase, restoration and quotations. The book is completed by the car’s sports career in Italy and other countries, culminating in the eight Trofeo A112 Abarth 70HP events and closes with reference to today, including the vintage races and the various clubs devoted to this important car. 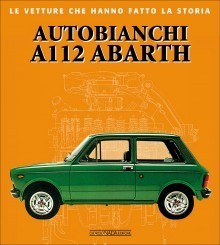