The book about the Ape – Piaggio ’three wheeler’ – that was waiting to be written, with a wealth of illustrations and completed with a comprehensive listing of all the models produced through to the present day. In the years immediately after the Second World War Italy was in desperate need of reconstruction, economic resources were scarce and there was above all a lack of a vehicle capable of satisfying the new commercial reality. On the one hand the market was offering large and expensive lorries, on the other cheap, small motorcycles but neither was suitable for small businesses. This changed in 1947 (just a year after the launch of the Vespa) with the presentation of the Ape that from the outset enjoyed enormous success and was offered in an infinite series of variants: flat beds, panel vans, tipper trucks, trailers, autorickshaws and fire trucks. A success story that has continued through to the present day with special versions built for the Pope and the President of the Italian Republic.
Until now there had never been a book capable of tackling the Ape phenomenon in its totality. This book presents the history and the engineering of a remarkable vehicle, taking in such aspects and styling and publicity, not to mention the great intercontinental journeys undertaken with this legendary three-wheeler. Lastly, along with the production figures, for the first time we are publishing a complete illustrated catalogue of every model produced to date, each accompanied by a detailed technical file. 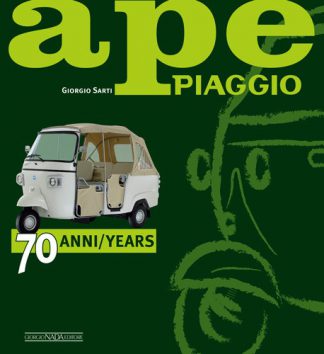